SAVING-E is a pilot project dealing with the transformation of the current wastewater treatment plants from being energy-consumers to energy-sufficient or even energy-producer facilities. With a total budget of €1.169.068, SAVING-E has a duration of 3.5 years (01/10/2015 – 31/03/2019).

The main objective of SAVING-E project is to evaluate whether is possible or not the conversion of current urban WWTPs from being net-energy consumers into self-sufficient or even net-energy producers, by using all the organic matter for biogas production thanks to the implementation of a two-stage autotrophic BNR (nitritation + Anammox) in the mainstream. This new process has not been applied or tested before neither at pilot scale nor at full scale.

SAVING-E will demonstrate the feasibility, applicability, replicability and transferability of the SAVING-E technology. This process will truly offer environmental, economic and social advantages compared to the current technologies applied in urban WWTPs.

SAVING-E will demonstrate the feasibility, applicability, replicability and transferability of the SAVING-E technology. Two-stage nitritation + Anammox in the mainstream. This process will truly offer environmental, economic and social advantages compared to the current technologies applied in urban WWTPs.

According to the EC DG Research and Environmental Technologies report, the worldwide water supply-to-demand gap is likely to reach approximately 40% by 2030, unless significant efficiency gains can be made. By the year 2050, around 60% of the worlds population is possible to experience severe water shortages, with 33% thought to be already under stress. In Europe, competing demands for limited and sometimes over-exploited water resources concern more than a few EU Member States; water scarcity and droughts already affect one third of the EU territory across different latitudes. Among water shortage, the pollution is a major environmental problem. In fact the two main environmental issues Europeans are worried about are: air pollution (56%) and water pollution (50%).

In this sense, Eutrophication is a process driven by the enrichment of water by nutrients, especially compounds of nitrogen and/or phosphorus, leading to: increased growth andprimary production of algae biomass; changes in the balance of organisms; and water quality degradation. Precisely, eutrophication is an indicator of the good environmental status (GES) of the Marine Directive (Directive 2008/56/EC): Human-induced eutrophication is minimised, especially adverse effects thereof, such as losses in biodiversity, ecosystem degradation, harmful algae blooms and oxygen deficiency in bottom waters. So, being nitrogen and phosphorous the primary inorganic nutrients responsible for the eutrophication, it is clear that in order to reduce human induced eutrophication, it is necessary to reduce the nitrogen and phosphorous load to the water bodies, especially to marine environment by implementing, for example, better sewage treatments like SAVING-E technology.

For many years now, the EU has been taking steps towards the reduction of nitrogen and phosphorous loads in the environment, notably through the adoption of the Urban Waste-Water Treatment Directive (91/271/EEC; UWWT) and the Water Framework Directive (Directive 2000/60/EC; WFD). However, only 6 Member States (Denmark, Finland, Greece, Austria, Germany and The Netherlands) have an overall UWWT compliance higher than 90% for tertiary treatment (mostly targeting at the elimination of nitrogen and phosphorus or the reduction of bacteriological pollution), while the rest of Member States has less than 60% of implementation, including Spain. So, that there is an urgent need for implementing cheap and efficient tertiary treatment but in fact, changes in the classical treatment applied for nitrogen removal are also needed, i.e. changes in the process of  nitrification followed by heterotrophic denitrification, a very energy-demanding process and high emitter ofgreenhouse gases.

SAVING-E deals with the radical re-engineering of current wastewater treatment processes in order to improve energy trades and flow of materials. The development of new technologies that are able to reduce energy costs and greenhouse emissions, as the SAVING-E process, are important for the future.

SAVING-E deals with the radical re-engineering of current wastewater treatment processes in order to improve energy trades and flow of materials. The development of new technologies that are able to reduce energy costs and greenhouse emissions, as the SAVING-E process, are important for the future.

The main objective of this project is to demonstrate, in a relevant environment at pilot scale, the feasibility, applicability, replicability and transferability of the SAVING-E technology at local and EU level.

SAVING-E technology uses most of the entering organic matter for biogas production purposes by designing a first biological step (the A-stage) with low oxygen consumption and high biomass production, i.e. with very low sludge residence time. The biomass produced in this step, therefore, would have a very favourable methane production potential, much greater than the achieved in the current urban WWTPs.

Then, SAVING-E technology is able to biologically remove nitrogen in the mainstream without the need of organic matter (the B-stage). SAVING-E uses the autotrophic biological nitrogen removal (BNR) for this aim with a novel two-step approach. This novel approach consists of two reactors, a first aerobic partial nitritation reactor followed by a second Anammox reactor. The application of autotrophic BNR to the mainstream reduces severely the aeration costs compared with current urban WWTP. Moreover, the novel two-step approach for autotrophic BNR represents an improvement compared with autotrophic BNR in one-step because is able to work stably at very low temperatures (10 ºC).

Therefore, the challenge of SAVING-E project is to radically redesign the urban WWTPs in a way they become energy-producers rather than energy consumers, without affecting its performance or even improving it.

The challenge of SAVING-E project is to radically redesign the urban WWTPs in a way they become energy-producers rather than energy consumers, without affecting its performance or even improving it. 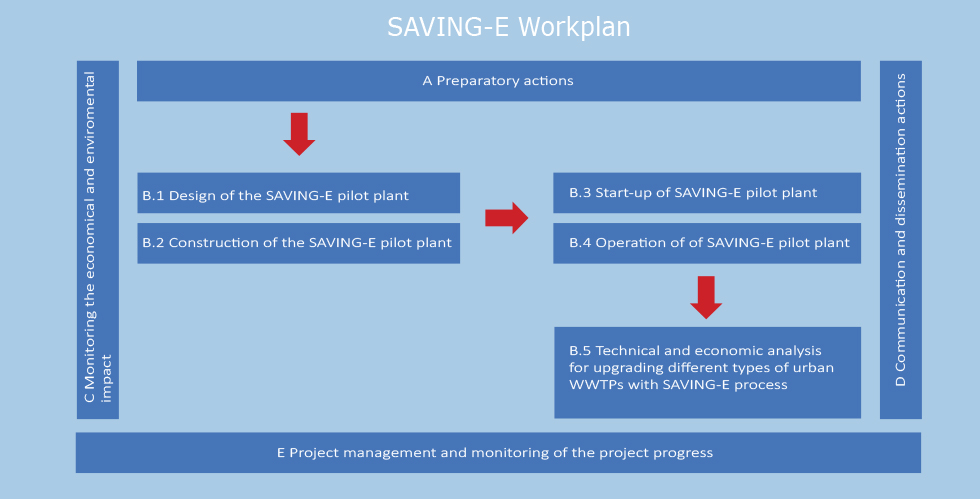 SAVING-E technology will be tested at pilot scale at first and at a relevant environment treating real urban wastewater in the long term. The implementation actions include the design, construction, start-up and operation of the pilot plant in the urban WWTP of Rubí (Barcelona). The pilot plant will be operating during 30 months at different temperatures, even 10 ºC, to show the stability of the process. To demonstrate the applicability of SAVING-E technology in any urban WWTP of any Member State of EU, the implementation actions will be completed with a technical and economic analysis for upgrading different types of urban WWTPs. Moreover, the technical, environmental, economic and social impacts of implementing SAVING-E technology will be assessed in monitoring actions at local, national and European level. The consortium will use different dissemination actions to promote the project outputs, to create a platform for communication between the project and stakeholders and to have measurable impacts. Disseminating the project outputs and results through the right channels is one of the key factors for the success of a project like SAVING-E and essential to ensure a lasting impact on the water sector.

The main expected result is to demonstrate and to disseminate that the use of SAVING-E technology will result in significant positive impacts such as: (i) energy savings, (ii) reducing CO2 emissions and the associated carbon footprint, and (iii) reducing operational costs. More particularly, the technical and environmental results and impacts of the application of the SAVING-E technology versus conventional technologies for treating urban wastewaters will be:

Increase of 50% of the biogas production

Reduction of 10% of the nitrogen discharge

30% of energy saving in the nitrogen removal process

40% of energy saving in the global treatment process

Reduction of 20% of greenhouse gas emissions

SAVING-E set of solutions will play a decisive role in the protection and improvement of the quality of the environment and for halting and reversing biodiversity loss if widely implemented at Catalan, Spanish and European level.