SAVING-E Pilot plant is constructed and installed at Rubí WWTP 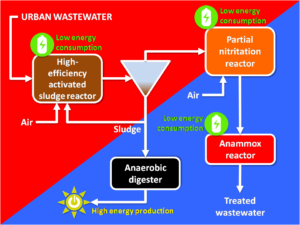 The SAVING-E pilot plant has been built and installed in the Rubí WWTP. It is expected to do the hydraulic tests in the month of June, while the official opening and the start-up are expected for the month of July.

The pilot plant (see diagram) Is comprised of a high-rate activated sludge reactor (A stage) in which most of the entering organic matter is used for biogas production purposes. Then, SAVING-E technology is able to biologically remove nitrogen in the mainstream without the need of organic matter (the B-stage). SAVING-E uses the autotrophic biological nitrogen removal (BNR) for this aim with a novel two-step approach. This novel approach consists of two reactors, a first aerobic partial nitritation reactor followed by a second Anammox reactor. The application of autotrophic BNR to the mainstream reduces severely the aeration costs compared with current urban WWTP. Moreover, the novel two-step approach for autotrophic BNR represents an improvement compared with autotrophic BNR in one-step because is able to work stably at very low temperatures (10 ºC).

The SAVING-E project is co-funded by the European Union under the LIFE+ programme.